Tropical Berry Smoothie Bowl. A healthy fruit-packed smoothie bowl that is easy to make in less than 10 minutes. Perfect for breakfast or as a snack!

I’m loving the hot weather.  Yes we had a bit of a heat wave but hey, at least it’s not pouring cats and dogs on the daily.

To stay cool in his heat, I’m posting a refreshing quick Tropical Berry Smoothie bowl that is dairy-free or vegan!

It’s made with almond milk versus cow milk as I am dairy-free. I even share how to made this bowl if you scroll down below! 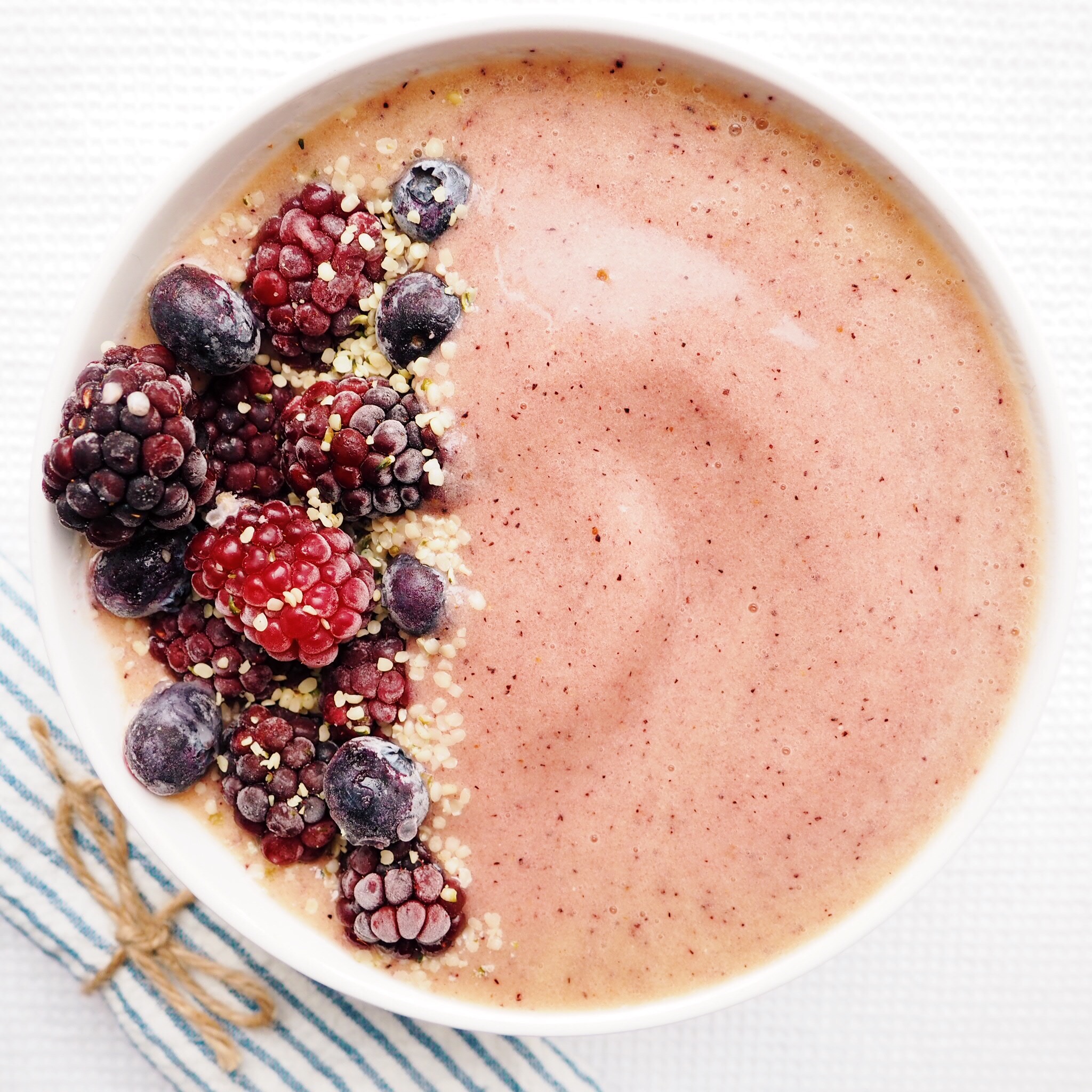 Watch how I made this

For my Tropical Berry Smoothie Bowl

You will need the following ingredients: 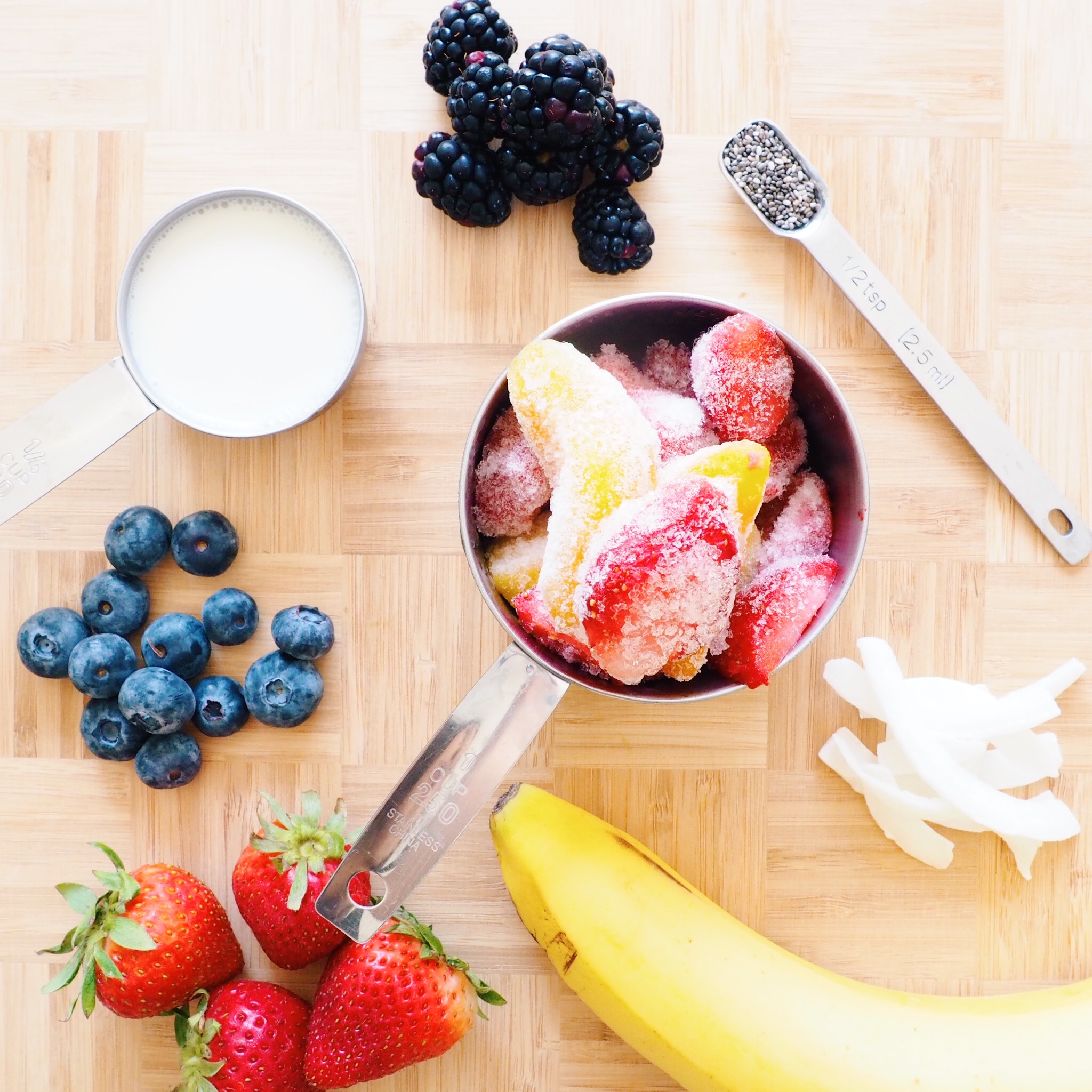 On a Personal Note

As I learn more about the effects of dairy on our health and why was dairy so heavily promoted in the past with those popular Got Milk Ads, I’m realizing it’s not working for my body.

I was born as lactose-intolerant similar to the other 65% of the human population who also suffers from this.  But due to the Canadian Food Guide, children and adults were told that we should drink milk to be healthy and without doing any research of my own, I forced myself to drink it through out my childhood up until my young adult years.  That was probably not the best idea.

I remember feeling bloated, experiencing cystic acne and feeling sick after drinking it.  I somehow transformed my body to accept it despite the rejection signs.

You are probably wondering why was the idea of dairy so heavily promoted then?  This 4 minute video by VOX explains it all, click below to watch.  I’ve also included a transcript just underneath for you to read.

“The dairy industry has become a very powerful economic force”, stated by Walter Willett, Department of Nutrition at Harvard University. “Around World War I, the US government sent huge amounts of canned and powdered milk overseas to fight malnutrition among soldiers. And farmers made huge changes in response. Many got rid of their other crops and animals to focus exclusively on dairy but when the war ended. demand dried up and the country was left with a whole bunch of milk it didn’t need. At this point farmers and milk processors had invested way too much time and energy to shift away from large scale year round milk production. So instead of making less milk, they convinced people to drink more.

Milk education campaigns encouraged students to drink 4 glasses a day and milk producers got a boost from legislation that created the National School Lunch Program in 1946. Those meals were required to have a glass of whole milk. Even with this promotion the US still saw huge milk surpluses in the 1940’s and 50’s so the federal government started buying up the extra milk. It sent some of it to schools, some of it to the military and to other countries as food aide but much of the surplus sat unused in vast underground storage caves.

By the 1980’s the government was spending $2 billion dollars a year buying up surplus milk. The Reagan administration, in its quest to stop government spending, put a stop to the buying program. And that did not sit well with dairy producers. They convinced Congress to change the rules so that they could create something called a “Dairy Checkoff”. Dairy Farmers would pay into the checkoff with a mandatory fee, that fee would go towards advertising campaigns aimed at people to buy more milk. The US department of Agriculture would approve all those campaigns. Those Got Milk ads are one example. The fees also paid for partnerships with restaurants like Dominoes, Taco Bell and Starbucks to develop dairy-heavy menu items like a pizza with 40% more cheese. All this means is that the USDA, the same federal agency that writes our dietary guidelines is also in charge of a multi-million dollar ad campaign to try and get us to eat a cheese pizza where one piece has two-thirds maximum recommended amount of saturated fat.

So why not change the recommendation? Instead of milk with every meal, why not tell people to drink water? “I think it’s impossible at this point in time because the political forces would not allow for the dietary recommendations to say anything about limiting red meat or dairy consumption.” stated by Walter Willett. The dairy industry gives millions to politicians to protect their interest whenever the nutrition guidelines come up for review every 5 years”….

Aside from the politics of dairy, we ought to question why would humans switch from human breast milk to milk of another species?  This excerpt from Save Our Bones definitely made me think some more about the topic: “Weighing around 100 pounds at birth, a calf typically gains approximately eight times its weight by the time it is weaned. But unlike humans, once calves are weaned, they never drink milk again. And the same applies to every mammalian species on this planet.  Also, each mammalian species has its own “designer” milk, and cow’s milk is no exception. For example, cow’s milk contains on average three times the amount of protein than human milk which creates metabolic disturbances in humans that have detrimental bone health consequences.  It’s important to bear in mind that mother’s milk is excellent nourishment for human babies, but its composition is very different from cow’s milk.” (Sourced from Save our Bones).

Please keep in mind this is based on my own research and I encourage you to do your own to come to your own conclusion.  I know for myself, I will be consuming less dairy where I can.  If not for my health but for environmental purposes because the cow industry is one of the largest contributors to greenhouse gas emissions.

Well I hope you give my Tropical Berry Smoothie Bowl recipe a try! It always excites me when you guys make my recipes and I hope this is one you try.

Thanks for visiting my blog! If you enjoyed this recipe, please share it with your family and friends or on social media! Take a picture if you’ve made my recipe and tag me on Instagram @christieathome in your feed or stories so I can share your creation in my stories with credits to you!

My name is Christie. I enjoy sharing mostly pan-Asian recipes from around the world. So that you can make them from the comfort of your own home. In my spare time, I enjoy spending it with my wonderful husband and two dogs, Bear and Maddie, outdoors in nature

Looking for a specific recipe?