Enoki Mushroom Egg Pancake. A savoury, chewy, easy to make pancake made with enoki mushrooms and eggs. Ready in less than 30 minutes and great as a side dish for any meal! Made with 5 ingredients if you don't count salt & pepper.

This enoki mushroom pancake recipe is something I make anytime I have enoki mushrooms in the fridge. I love this dish because it's made with ingredients that you would have most of the time, such as eggs, flour, green onions, oil, black pepper and salt.

You can make them into mini sized pancakes or two large pancakes that you can cut into squares for ease of eating. I like making the bigger version because there's less action involved. Yes that's how lazy I can be sometimes.

This enoki egg pancake is a great side dish for an Asian breakfast, lunch or dinner and apparently Korea has their own version of this too!

I also share other savoury pancake recipes below so don't forget to check them out!

You will need the following ingredients for my enoki mushroom egg pancake:

How to make enoki mushroom pancakes

Cut the rooted ends of your mushrooms off (about 1.5 inches). Slice them into 1 inch long pieces. Give it a thorough rinse in cold water and let the excess water strain.

In a non-stick pan over medium heat, add 2 tbsp of oil. Add half of your batter into the pan and spread it evenly into a circle. Cover with a lid. Fry on each side until golden brown, about 4-5 minutes. Keep monitoring.

Slice and enjoy with dipping sauce!

Well I hope you give my Enoki Mushroom Egg Pancake recipe a try! It always excites me when you guys make my recipes and I hope this is one you try.

Thanks for visiting my blog! If you enjoyed this recipe, please share it with your family and friends or on social media! Take a picture if you've made my recipe and tag me on Instagram @ChristieAtHome in your feed or stories so I can share your creation in my stories with credits to you! 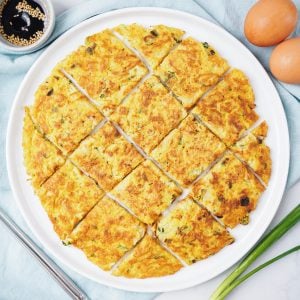 Hello! My name is Christie. I enjoy sharing mostly pan-Asian recipes from around the world. So that you can make them from the comfort of your own home. In my spare time, I enjoy spending it with my wonderful husband and two dogs, Bear and Maddie, outdoors in nature.